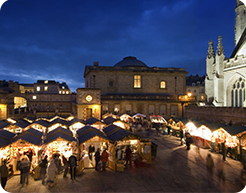 A fully guided day trip to Britain's most important pre-historic monument "Stonehenge" and the beautiful city of Bath. This coach tour from London includes admission into and an audio guided tour of Stonehenge and the Roman Baths.  Your guide will also give you a tour of the city of Bath and you will have some free time also to enjoy some of Bath's other attractions.

We combine two of England's most popular attractions with a fully guided tour of mysterious prehistoric Stonehenge and the beautiful golden city of Bath, steeped in the history of the Roman era and Georgian period. 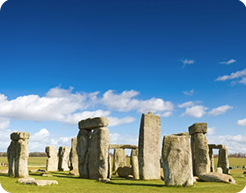 After departing London we head westwards into the rolling hills and chalk downlands of Wessex, into a land of burial mounds and stone age settlements. High up on Salisbury Plain stands the greatest Neolithic monument of all, the prehistoric circle of Stonehenge. As we head towards the area our guide will enlighten us with the history of this powerful place. We can hear of the different periods of building, the different types of the stone used, the alignments of the monument and theories behind its construction. We will learn of what is known and discuss ideas about what may never be known. We are then able to walk around the entire site to gaze upon and contemplate this Stone Age marvel. 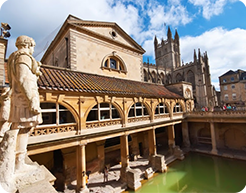 We then head further westwards passing villages of flint and thatch into limestone country and down towards the World Heritage city of Bath. Here in the valley of the River Avon flow the only hot springs in the country. Gallons of hot water bubble up to the surface every day and, back in time, this had attracted both the Celts and the Romans who named the city Aqua Sulis, when the settlement became a premier Roman resort in the First Century AD. Later in the 18th Century the city was beautifully re-invented by the Georgians. The spa became a place to see and be seen, a chance to rid themselves of stiffness of the joints and gout. The town was blessed with wonderful new houses, elegant crescents, terraces and squares. It became home to Jane Austen, Thomas Gainsborough, Lord Nelson, Alexander Pope, Napoleon III, a place for Royalty and nobility to socialise and take the waters. 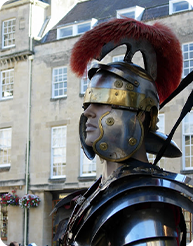 Upon arrival there will be plenty of time for lunch, a chance to look around the shops and boutiques and also to visit the Roman Baths Museum (entrance included). Later in the afternoon join our guide for an eye-opening walking tour of the city, visiting the Royal Crescent, the Royal Circus, Bath Abbey and the Assembly Rooms. Two important periods of time will be brought to life by our guide, the history of a resort at the very edge of the Roman Empire and the opulent lifestyle of the rich and famous of the Georgian era. A wonderful way to end the day before we return to London.

Estimated time of arrival back in central London is 7pm

The typical group size on this particular day trip is 30-40 people but full size coach tours can take as many as 75 people. This tour is not one of our small group tours (except on Saturday 14th December when it will be a small group tour), which of course are more expensive.

If you intend to travel to our central London meeting points by public transport, you can plan your journey in advance on the Transport for London website  - click here

Please note that some tours will include a visit to Windsor en route, however, this information will not be known until the day of the tour.  The walking tour of Bath will be replaced by a coach tour of Bath on some occasions.